Basel, June 15, 2017. Baloise celebrates the start of above-ground construction works for the first building of its Baloise Park project with a cornerstone ceremony. This is the first of three buildings. It will stand 89 metres tall on completion and be home to the Mövenpick Hotel and several floors of office space.

The Baloise Park complex is being built in the direct vicinity of Basel's central station. In addition to the high-rise building, which will feature prominently on Basel's skyline, the complex will include new Group headquarters for Baloise and an additional office building for the company's training centre. From 2020, the large public square that will be part of Baloise Park will serve as a new gateway to Basel's by then remodelled Aeschengraben boulevard. Baloise will thus be creating an attractive link between the railway station and the city centre.

The laying of the cornerstone for the tower building today marked the official start of construction works above ground. Baloise's active engagement in the arts scene is reflected in its unusual choice of cornerstone, which takes the form of a copper pillar designed by artist Karsten Födinger (winner of the Baloise Art Prize 2012) that is to be anchored in the floor of the building. Guests had the opportunity to sign the pillar with a personal dedication. The cornerstone pillar will remain exposed and on display as a contemporary artefact in the basement of the building.

All in all, Baloise plans to invest more than CHF 300 million in its facilities in Basel. “The laying of this cornerstone today continues a tradition of distinctive architectural projects being realised by Baloise in Basel,” says Andreas Burckhardt, Chairman of the Board of Directors of Bâloise Holding AG, at the ceremony. “The construction of the Baloise Park complex is also intended as an investment in Basel as a centre of commerce and important trade fair location. This investment underlines the importance of Basel as a location for our company”.

A large part of the new high-rise building will be occupied by Hotel Mövenpick, a five-star hotel that will offer 264 rooms. The top seven of a total of 24 floors will be rented out as office space. “The planned buildings will create 1,300 new office workspaces,” explains Martin Wenk, a former member of the Corporate Executive Committee, enthusiastically. “The new buildings and our existing Baloise offices at Aeschengraben 21 combined will offer a modern and innovative work environment in an outstanding location for around 2,700 employees.” In his role as Head of Asset Management, Martin Wenk played a crucial part in the design and planning of Baloise Park right from the start and he will continue to chair the project steering committee for the entire duration of the construction works. “After starting the dismantling of the old buildings on 2 November 2015, laying this cornerstone constitutes another important milestone for the Baloise Park project,” says Martin Wenk. Works to construct the remaining two buildings are scheduled to begin in early 2018. The relevant planning permissions have already been obtained. By 2020, all of the buildings in the Baloise Park complex should be ready for occupation. 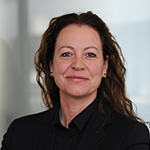 The Baloise Group is more than just a traditional insurance company. The changing security, safety and service needs of society in the digital age lie at the heart of its business activities. The 7,900 or so employees of Baloise therefore focus on the wishes of their customers. The best possible customer service, combined with innovative products and services, makes Baloise the first choice for people who want to feel ‘simply safe’. Located at the heart of Europe, with its head office in Basel, the Baloise Group is a provider of prevention, pension, assistance and insurance solutions. Its core markets are Switzerland, Germany, Belgium and Luxembourg. In Switzerland, the Group also operates as a specialised financial services provider, offering a combination of insurance and banking services. The Group offers innovative pension products to retail customers throughout Europe from its competence centre in Luxembourg. Bâloise Holding Ltd shares are listed in the main segment of the SIX Swiss Exchange.

A very special Christmas event will take place when Baloise unveils the largest Advent calendar in Basel on 1 December. Over the festive season, the western facade of the new Baloise Group ...
View media release

The new Baloise headquarters is set to open its doors this week following a construction period of almost five years. The building is the first of three which, together with the existing ...
View media release
Share this page